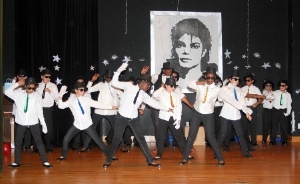 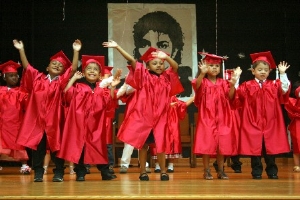 Parents, family and friends packed the A.G. Hilliard Elementary School auditorium Wednesday night to witness the graduation of 92 Pre-K 4 and 19 fifth-grade students.
Karine Valdez was the mistress of ceremony that included Pre-K performances of "I Have a Dream," "Three Little Birds," "Count by 5's" and "Yesterday's Dream." Third-graders recited the poem "Graduation Day" followed by more Pre-K performances including the graduation poem and song "World's Greatest."
Fifth-graders sang "The Climb" and capped off the action with the dance "Man in the Mirror."
The theme of the graduation ceremony was "Time for a Change" and the spirit of the late pop superstar Michael Jackson was the foundation for the evening's events.
Superintendent M. Annette Cluff and Campus Director Yolonda Brown conducted the ceremonial presentation of the diplomas after Luis Garcia, the valedictorian and Angela Arias, the salutatorian, delivered brief speeches.
Mrs. Cluff also issued the book "Who's Who in Black Houston" to each fifth grade student. The superintendent recently was honored by being included in the book and having her picture on the cover. Mrs. Cluff told the graduating class members that she hopes the book will inspire them to earn a spot in a future "Who's Who" book some day.
Click here for photos.
Published May 26, 2011