Jazz and poetry form a sound combination for students and staff 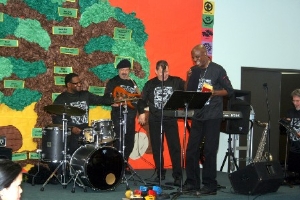 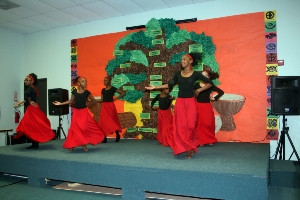 Varnett celebrates Black History Month
Drummer and activist Bubbha Thomas on Tuesday brought his famous “Jazz & Poetry Series” to the East Campus and presented what he hopes will be a lasting impression for students about America’s art form.

The Black History Month event in front of nearly 240 East and Northeast second through fifth grade students introduced the music of such jazz greats as Louis Armstrong, Duke Ellington and Houston’s own Arnett Cobb. Mr. Thomas and his band established a dialogue with the students and broke jazz down to a foundation of fun and participation.

Students and teachers from both schools were clearly caught up in the hour-long activities as Mr. Thomas’ band played music that was representative of key periods in the 1900s.

“When I started this over 30 years ago, jazz was a bad name,” Mr. Thomas said in an interview. “We have found creative ways to bring jazz to the community.”

The group told stories about every instrument on the stage. The band members were Martin Langford on saxophone, Gilbert Sedeno on keyboards, Gilbert Sedeno, Jr., poetry, Anibal Ambert on bass and Vernon Daniels on drums.

To start off the show, Mr. Thomas gave prizes to the student who answered the question, “Who led hundreds of slaves to freedom through the Underground Railroad?” Answer: Harriet Tubman. And, "What is the First Lady’s first name? “ Answer: Michelle

At the end of the show, several students were selected to take part in the music as the audience clapped and bobbed their heads to the music. After Mr. Thomas packed his gear, he reflected on the event. “Hopefully, the students learned about how the jazz beat came about and the different styles of music – and that jazz is fun,” Mr. Thomas said. “It’s a lesson but they don’t know it’s a lesson.


For more than three decades, Mr. Thomas has been a widely known recording artist, songwriter, drummer and producer of children’s programs. The five-time Grammy nominee’s “Jazz and Poetry Series” is the nation’s No. 1 children’s program as well as the internationally acclaimed “Summer Jazz Workshop,” according to his website.

Bubbha Thomas and band jazz up a crowd (See Video)

On Wednesday,  East and Northeast Pre-K through 1st grade students presented “An African American Journey Thru Jazz” at East Campus, with student Jesse Jimenez serving as master of ceremony. More than 400 students attended.